Thousands of speedway fans made the annual pilgrimage to Palmerston North for the superstock Teams Champs, filling the city and bringing millions to the Manawatū economy.

Both nights of the hugely popular annual event at CET Arena sold out, with about 16,000 people buying tickets, and those people are a fillip for shops, bars, eateries and accommodation.

There was a carnival atmosphere in Palmerston North throughout the weekend, with Teams Champs fans enjoying the racing and festivities.

Palmerston North City Council venues and events manager John Lynch said 80 per cent of the 16,000 ticket holders were from outside the region.

“This is the biggest annual event on the speedway calendar, which generates over $6 million of economic benefit for the local economy.”

He said sport generated about $30m of economic benefit annually for the city, with people attending meetings during the year.

The Central Economic Development Agency’s chief executive, Linda Stewart, said the event had significant economic benefits for the city and the region.

She estimated last year’s event injected $3.5m into the economy.

“Major events held in the region bring a significant rise in visitor’s daily spending …on the event tickets, food and beverages, accommodation, shopping, transport and other.”

It wasn’t only the hospitality and tourism sector that benefited from the Teams Champs event, it was also mechanics, engineers, sign writers and other car-servicing businesses.

“We also know that it is a big weekend for shopping, so we anticipate a good boost to our retail spend too.”

A sports field at CET Arena, transformed into a campground for the weekend, was packed with people.

Janine Neale had travelled from Waipawa in Central Hawke’s Bay and was part of a group of about 20 who had booked four sites for their camper vans and tents.

Neale arrived at the venue at 2.30pm on Thursday to ensure they got the best spot at the ground, in a sheltered corner of the field.

She said it was a great weekend to get together and relax. “I like to get this spot because there’s a few of us. We keep it nice and quiet.”

They were Hawke’s Bay Hawkeye fans, but were happy as long as the perennially successful Palmerston North Panthers didn’t win.

The group used to stay in motels for the event, but the cost of $150 for three nights, and the atmosphere made the campground more attractive.

Fellow campers Robert Semple and Zena O’Grady had come from Mercer, south of Auckland, and were supporting the Auckland Allstars.

It was the first time for O’Grady, but Semple had been coming for more than 30 years.

Saturday was his birthday – he turned 61 this year – which always made Teams Champs a special weekend.

Ricky Quirk owns central city bars The Cobb, The Daily and Trader McKendry’s and he said the weekend had been crazy with people in his establishments.

Starting with a “huge” Friday night, his bars had been busy all weekend.

The Fitzherbert Regency Motor Lodge in Palmerston North was decorated with speedway flags and manager Kevin Davey said the motel was full of speedway fans from around the country.

“We’re very passionate about [speedway], we embrace it and it’s exciting for the city,” he said.

The motel offers accommodation for next year’s Teams Champs as guests are leaving, but any rooms that aren’t booked are quickly snapped up.

“The motel has been full along with every other motel in the city, just about as far away as Ōtaki and Taihape.” 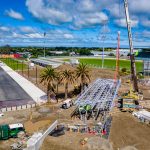