Yesterday installation of the retaining wall for our entrance plaza began, which leads up to the pedestrian bridge on the corner of Cuba Street and Waldegrave Street. Construction begins today on major upgrades to the Central Energy Trust Arena, in what is understood to be the first major Local Government project in New Zealand to begin post lockdown.

Over the next year, a new entrance plaza will be established on the corner of Cuba St and Waldegrave St, state of the art speedway pits installed, and the embankment re-developed.

The total cost of the combined Arena Redevelopment programme is just over $17.1 million. This includes everything from design, consultation and consenting, professional fees, through to construction. Central Energy Trust has contributed $1,078,000 towards the project, with council funding the remainder.

Construction will be completed within a year.

These three separate projects will be constructed at the same time, but the speedway pits will be completed first in October.  The pits, which line the Cuba St side of the Arena, will be upgraded to concrete and asphalt surfaces, with water, power and lighting services installed. A green space next to the pits can also be used as a recreational area.

The entrance plaza will be the welcoming point for visitors to the Arena, and includes a large bridge that allows users to walk over the speedway pits on the way to their seats. The embankment work will see a better connection between the seating and grandstand, as well as a large ablution block that has been engineered to hold additional grandstand seating in the future.  The plaza and embankment work will be complete in April.

“We’re proud that this project can support our local construction industry and provide employment for so many. The lead contractor, Humphries Construction, is based in Palmerston North and approximately 90 per cent of the subcontractors are also based within the Manawatu. The remaining 10 per cent is due to those products or services not being available locally. It’s great for a construction project of this scale to be created by locals, for locals.”

Humphries Construction Managing Director, Paul Humphries, says its team and sub-contractors are rapt to have been awarded the contract.

“ A huge congratulations must go to Council for having the foresight and initiative to execute this contract through these changing times, a decision that will directly & immediately benefit the local economy. To have been entrusted with this civic project brings us much pride.  Having undertaken construction and development projects across the region for more than 20 years, we certainly do not take for granted this huge opportunity and understand the part we play in the delivery of this project to Palmerston North City. We are excited to get underway.”

Completed work is a symbol of hope for our city

The results of these major upgrades will bring bigger and better entertainment options and international sporting events to Palmerston North city, which have major flow-on economic impacts for the region.

Mayor Grant Smith, who’s Council approved the tender the day before Alert Level 4 lockdown, says this project resembles a symbol of hope and growth for our city.

“After what our country has experienced over the two months, the upgrades at the CET Arena are the light at the end of the tunnel. While we cannot hold big events at the moment, getting this work started now means that when things return to a new normal, we will have a place to come together again as a community – but it will be better than ever before.”

Ms Shotter says this project isn’t just about making the Central Energy Trust Arena better for speedway fans, but rather it’s about driving our local economy far into the future.

“The Central Energy Trust Arena complex holds around 3000 events each year and is home to 36 different sporting codes, with Speedway, Rugby, League, Basketball, Volleyball and Netball its main codes. It is arguably the nations busiest Stadia, much more than the higher profile metro stadiums that are only used a few days a month at best. This brings in more than 400,000 visitors each year, serving 300,000 plus people in the lower North Island. Many of these people live outside of Palmerston North and come here for an event, stay the night in local accommodation, eat out, and enjoy our recreational activities. In 2018, the NZ Superstock Teams Championships weekend alone contributed $5.2M to our local economy. Upgrading this facility will bring in more and bigger events, which will create and sustain jobs in our hospitality industry and provide a significant boost to our local economy.”

Phase 2 of the Arena Masterplan will get underway in early 2020. This includes:

A welcoming and attractive entrance plaza will draw visitors to the main Central Energy Trust Arena entrance and ticket gate, connected to the venue by a landscaped pedestrian concourse.

New speedway pit facilities will be developed along the southern side of the Arena complex behind the proposed new grandstand, directly adjacent to Cuba Street.

The reconfigured western embankment will create an extended concourse with the addition of a new plinth. 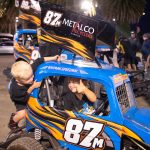